Cybercriminals commonly send malicious attachments and hyperlinks via email in order to infect computers with malware or direct users to websites designed to trick them into revealing their account credentials. TAP protects users by blocking links to known malicious websites and removing email attachments containing malware.

TAP works behind-the-scenes, which means you do not need to do anything to activate or take advantage of the system.

TAP scans incoming email for known malicious hyperlinks and for attachments containing malware. TAP rewrites scanned URLs as Proofpoint URLs. TAP works behind-the-scenes, which means you do not need to do anything to activate or take advantage of the system.

In most cases, you will not notice anything: the change will not affect the displayed content of the message itself, with the exception of plain-text emails (see note below). However, if you hover your mouse over a hyperlink, the embedded URL displayed will show the destination URL rewritten as a Proofpoint URL. The URL will function normally from the user’s perspective.

Proofpoint URLs will begin with https://urldefense.proofpoint.com. If you were to receive an email sent from someone outside of USC that included a link to the EDUCAUSE homepage, you would notice the following:

These rewritten URLs allow Proofpoint to check the hyperlink’s destination against its continuously updated database of malicious sites. If the destination site is considered safe, the hyperlink will function normally and will take you to the intended destination website.

If the destination site is compromised, the site will be blocked. If you click a link to a blocked site, you will be redirected a page on the Proofpoint website, which will explain why the site has been blocked: 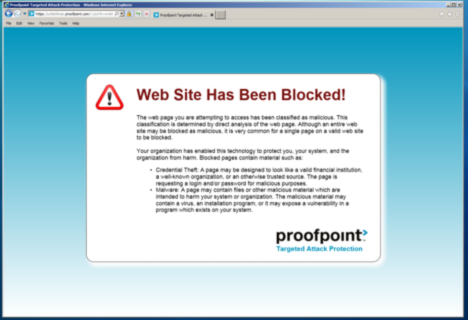 For more information about how TAP works, see www.proofpoint.com/us/solutions/products/targeted-attack-protection.

Emails sent and received in plain text do not include HTML markup, such as embedded URLs. When TAP detects a hyperlink in a plain-text email, it will rewrite the URL in plain text. In this case, you will see the rewritten URL directly in the body of the email.

Most modern email applications send and receive HTML-enhanced or rich-text emails, and function as described in the How TAP Works section above.

TAP does not rewrite URLs in email attachments. However, it scans the attachments for hyperlinks and, if it detects a URL to a known malicious site, will block the attachment.

Once TAP has rewritten a URL, the new URL will persist if you reply to or forward the message, even if you include recipients not covered by the TAP program. The rewritten URLs will remain functional and work for recipients as described above. If you are concerned that your recipients may have questions, you might consider including a note in your signature file along the lines of:

“USC email is protected by Proofpoint’s Targeted Attack Protection. Hyperlinks in this email may begin with ‘urldefense.proofpoint.com’ and include a unique serial number.”

NOTE: TAP does not scan outgoing email. Any links you add to the forwarded email will not be rewritten.

If you believe a URL has been blocked unnecessarily (false positive) or believe a fraudulent site has not been blocked (false negative), please contact the ITS Customer Support Center.